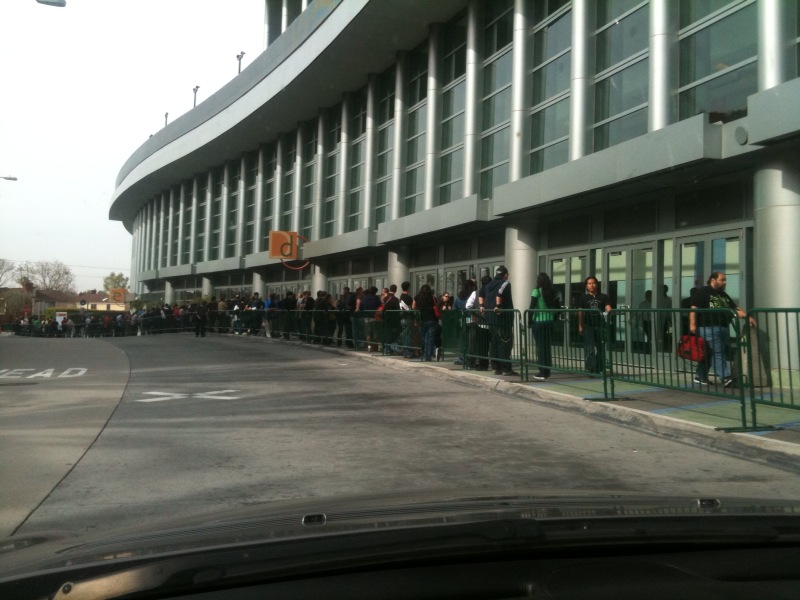 So this past weekend North America boasted two major comic-conventions, the much hyped debut of C2E2 in Chicago and the much-less hyped but no less controversial inaugural Anaheim Comic-Con. The C2E2 show had the backing of Reed Exhibitors and what appeared to be the entire comics industry with  every major comics publisher in attendance as well as an impressive line up of the industries top writers and artists. In a word, the show was stacked.

I did not attend the C2E2 show, I can’t comment on it in any fashion. The Reed people put on fabulous shows, I’ve attended three of their New York Comic Conventions and those shows are second only to San Diego. They are big shows, with big guests and great fans in attendance every time I’ve been a guest. But when it comes to C2E2 I have no opinion as I did not attend even after attempting to do Chicago on Friday and Anaheim on Saturday. Deadlines prevented this from becoming a reality and I turned my focus solely on Anaheim instead.

My over-riding fascination with Anaheim and the southern California convention scene comes from my being a California native and growing up in what has consistently been an inconsistent market where comic book and comic related events are concerned. I started attending Creation Conventions as a kid, Creation Cons were a chain of shows that always had a nice batch of relevant comic  book guests: John Byrne, George Perez, Jim Shooter and John Romita Jr. were regulars on their circuit. They were held at the Disneyland hotel twice a year, seemed to be well attended and then in a flash, Creation vanished from sight in the mid-80’s and never returned. Orange County hasn’t enjoyed a regular comic book show in almost 30 years. The closest thing to an Orange County show in recent years were the Long Beach shows that Wizard threw a few years back before abandoning the LBC for Los Angeles. The first Long Beach show had crowds and energy, there was a buzz. Then as fast as it arrived, the buzz left and the switch to L.A. seemed to cool the venue and its future prospects. From my vanatge point it seemed like diminishing returns as far as crowds and interest. Dowtown Los Angeles is not an ideal venue for comic shows. The parking and location are equally discouraging and sparse. There are no casual restaurants in walking distance and everything is very expensive. The new developments have improved the site’s potential but not not by much, and not enough. 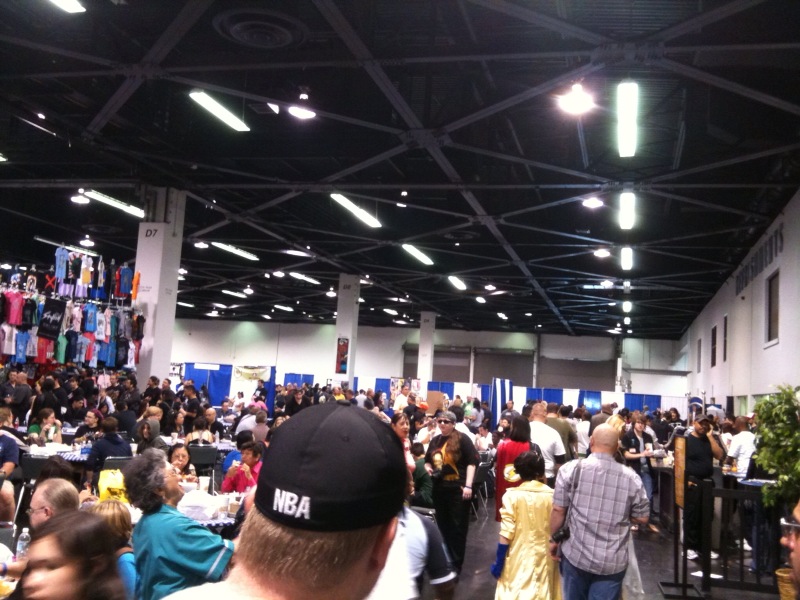 When Wizard announced that they were going to set up a show in Anaheim I was skeptical that the community would cooperate to the point of creating a worthwhile convention experience. There’s always so many events and distractions going on in Southern California, two major league baseball teams,  Two major NBA and NHL franchises, a dozen college sports teams, multiple concert venues, 2 major amusement parks excluding Disneyland…you get the picture. And the community is jaded by its proximity to Hollywood. Did I mention the beaches and the gorgeous weather??? In a nutshell, So Cal has always been a challenge for promoters and that’s without the shadow of San Diego Comic Con which has loomed ever larger as the media attention surrounding Comic-Con has increased tenfold. Everyone has Comic-Con on their calendar and everything else is second place. So throwing a Comic-Con 4 months shy of the really big show presented it’s own brand of chutzpa.

Gareb Shamus and I have always been friendly. We’ve never been particularly close but we’ve always been ‘buddies’. His Wizard magazine spent most of the past decade mocking me and using me as the butt of jokes AFTER using me and my peers to sell millions of copies in Wizard’s early years as the magazine found it’s footing and built its brand. But for some reason I never let it affect my friendly relationship with Gareb and his family. In short, I like Gareb and respect what he has accomplished over the years. I have watched him grow his convention business and I remember the Chicago Comic Con before Wizard purchased it and infused it with new energy and excitement. The show was dying and Wizard pumped new life into the con. For years, I felt that Wizard Chicago was the best show on the circuit. I attended last years show which was clouded under the abandonment of every major publisher pulling out for the first time in memory. It was crowded and and as Aldo Raine put it best “Business was a boomin’ ” 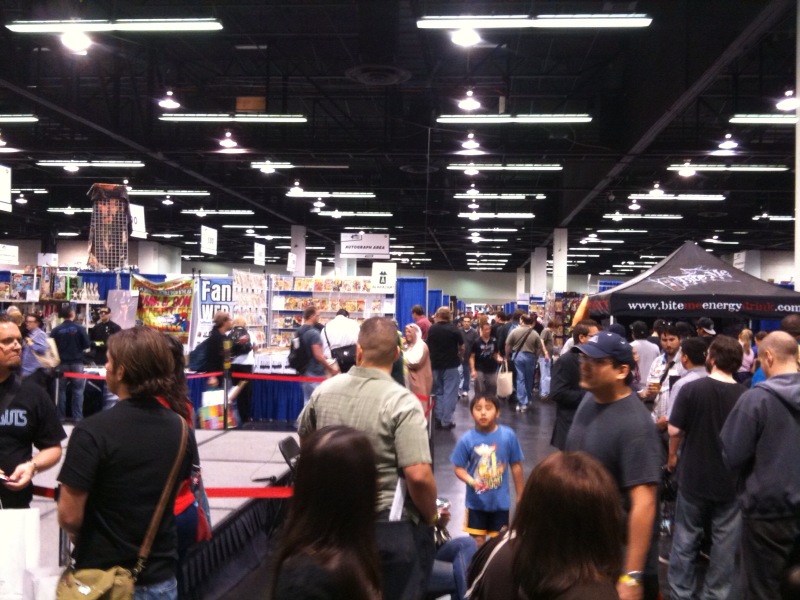 I attended 11 shows last year and Chicago 09 was the busiest and the most profitable from a business standpoint for me. Everyone in our business is aware that San Diego is increasingly less comic book creator friendly and it has become difficult to turn a profit in the face of escalating costs and diminished interest in the public. Most attendees of San Diego are spoiled by the free t-shirts and posters and they all want something FREE from your table. San Diego has the largest attendance and as a result, the largest amount of looky-loo’s. As a vendor, you set up to make money, pay your travel costs and hopefully pocket some cash. The one thing I can say for certain about Gareb’s shows is that the customers are spending money. When the crowds are buying the vendors are smiling.

When I arrived on Friday to set up for Saturday, I was shocked at the amount of attendees that were present. The show had a nice crowd but I was still skeptical about the prospects for Saturday. Regardless of my skepticism, I was also impressed with the sheer amount of high end vendors that had bought space at the show. The show was filled with comics, toys, t-shirts and statue dealers, some of whom I was surprised were not across the country ar C2E2. I arrived early on Saturday and as I headed towards the parking garage, I was impressed with the long line of con-goer’s waiting outside the hall. Gareb could have something here I thought…..but my skeptical So Cal brain still doubted the overall outcome. For this show I was a late addition and when I’m not in time to be promoted for the show I generally do a batch of free head sketches in order to promote my booth. A few moments after the show gates opened the crowds started pouring in and  my booth was deluged with interested fans and curious conventioneers. 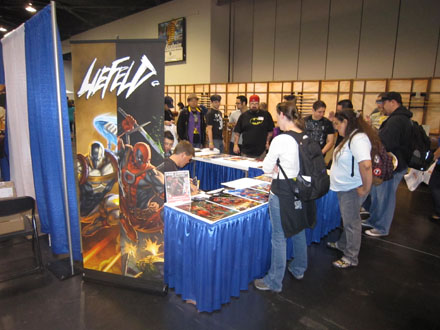 For the record, I love shows, I love fans, I love the hobby. Personal interaction has become more valued to me as the years have gone by. We have a very competitive business and nothing beats putting yourself smack dab in front of the fans for several hours. In my youthful heyday, I’d sit and sign a few hours and hightail it outta the show, over the past several years I realize the value in sitting an entire day and visiting with as many fans as possible. When you have navigated the pratfalls of a 24 year career you really appreciate the opportunity to stop and smell the roses. Yes, fans, you are our roses. Even if don’t always smell rosy and that goes for us pro’s as well.

The Anaheim show was admittedly light on comic book creators, featuring a bevvy of Hollywood celebrities instead. In my next post I’ll detail the quarel between Adam West’s manager and the show staff over William Shatner getting the cover of the program instead of West….I witnessed it firsthand and it might be my favorite convention experience of ever. But between Adam West, William Shatner and Stan Lee, they had crowds and fans that numbered in the thousands. I’m talking longer lines than Geoff Johns at a Green Lantern Cosplay party. Geriatrics all, they packed the show and drove much of the excitement in the hall. The same could be said for Kevin Sorbo and Shannen Doherty and the cast of Charmed, all of whom were paid $50 bucks for their signature in addition to $50 bucks for a photo opp. Several fans that visited my booth proudly showed me their photos with Stan, West and Shatner. Doherty and Sorbo too. And they still bought generous copies of Image United, Youngblood and Deadpool Corps. The comic creators in attendance, Phil Jimenez, Simon Bisley, Glenn Fabry, Todd Nauck, Danny Miki and Norm Rapmund all enjoyed plenty of attention from a crowd that wanted more comic creators to go with their Hollywood Celebs and I couldn’t help but think what the show would be like with even a mid-size comics publisher on display, much less one of the major publishers. 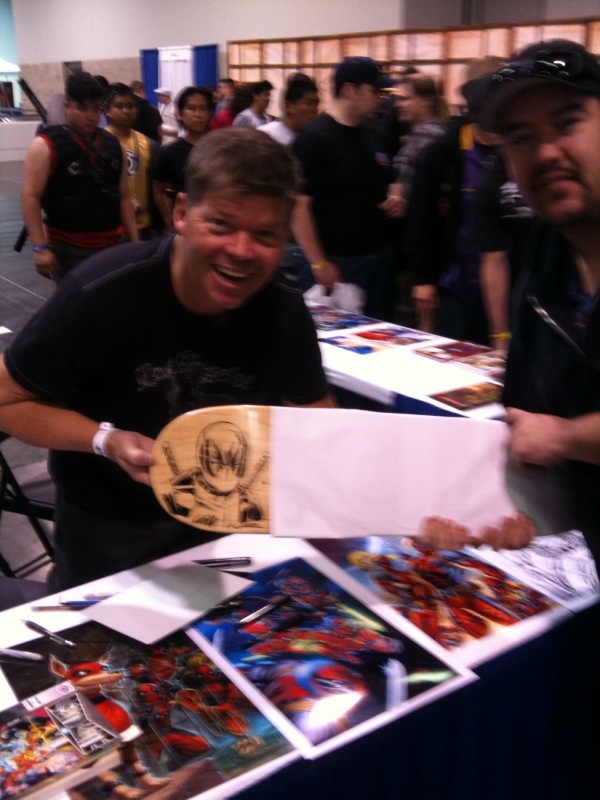 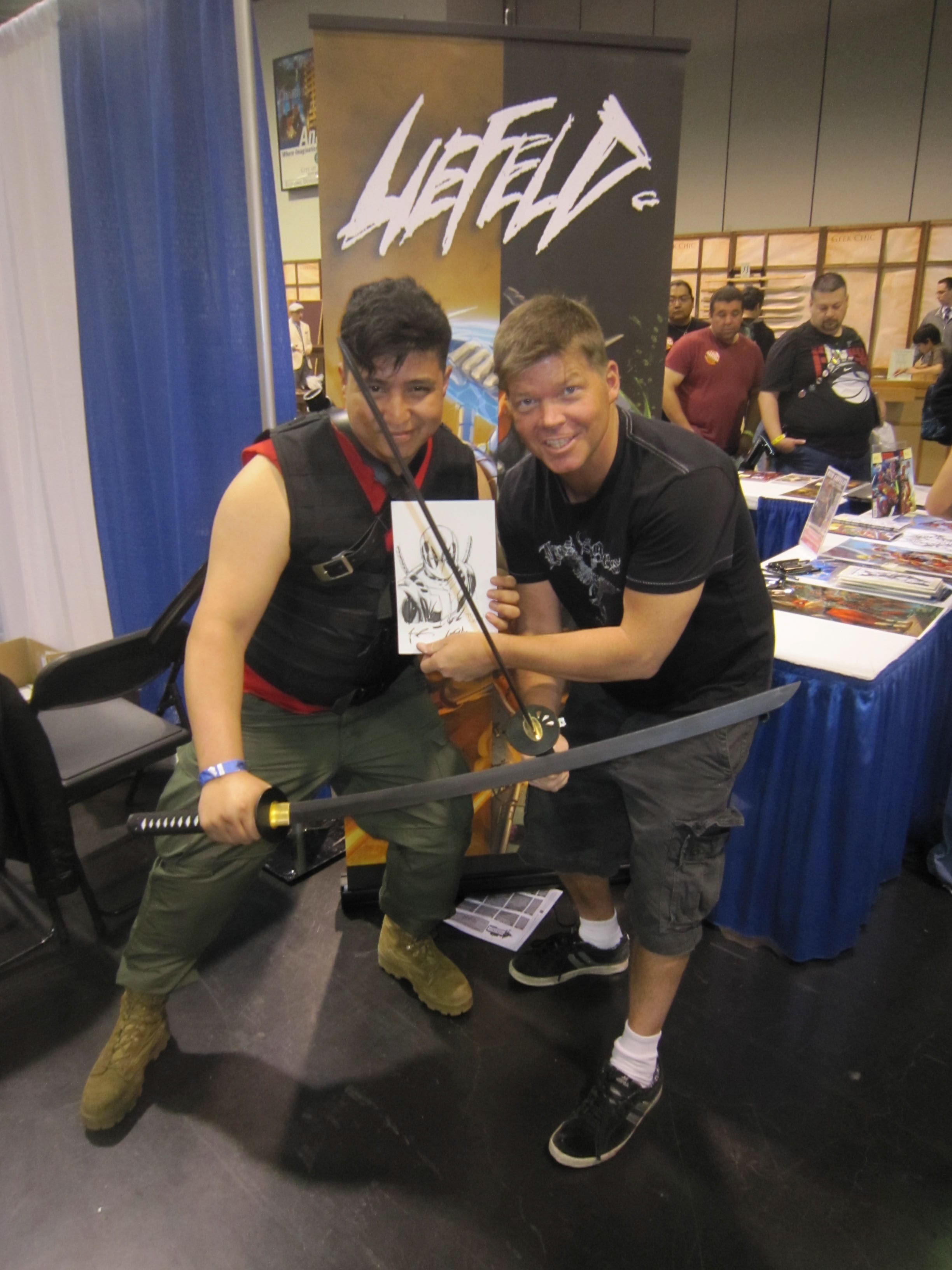 The success of San Diego has made the word Comic-Con a buzz word in the lexicon, when people hear it, they are curious as to what a ‘Comic-Con’ entails, its a much more attractive word than it was ten years ago. There were many first time con-goers  eager for a peak behind the curtain, with the same curiosity I had when I was a kid. Entire families were wandering the floor and consuming comic related products. Yes the recession is absolutley still affecting consumers, but the resistance and the freeze on spending appears to be thawing.

I caught up with Gareb for a nice talk about the business and he shared with me an aggressive schedule of shows that he has planned. Gareb has shifted his strategy and his focus to the celebrity names and it’s working and drawing crowds in a traditionally indifferent community that is 90 minutes from San Diego. What I saw take flight back at Wizard Chicago with Battlestar Galactica actors as the show’s centerpieces, up through this past weekend’s Anaheim success with the geriatric celeb set, Gareb has found a path of success that definitely sets his shows apart. But I can’t help but believe that his tenacity will be rewarded as news of his shows successes spreads. Not every show will work, the number of shows is growing to the point that they can’t all be successful, but all he needs is a few strong anchors to build around. Anaheim definitely has room to grow and with the eventual addition of more comic creators the base will further energize. It could become a much larger show if comic creators continue to look for life rafts from the deluge of Hollywood dominance in San Diego.

Gareb is on his 3rd or 4th life at this point, he appears to have many left. I know a thing or two about multiple lives in this business and when the whole world is betting against you, motivation is easy to find. Gareb appears motivated and determined to become the King of Con’s. With his connections and his current game plan I would neither sleep on him or count him out on any level.

This cover has always been one of my favorites from my early New Mutants days. I forget which issue number it was. Scott Williams inked it before he was co-opted by Jim Lee full time.

Here’s another shot from Deadpool Corps. #3 coming next month! Thanks for all the continued support for the ongoing series! We are all having a great time producing each issue!

I grew up in Anaheim about 10 minutes from Disneyland. As far as comic book conventions there were a few at the Disneyland Hotel back in the early 80’s. As a teenager, I had a chance to meet George Perez, John Romita Jr., Jim Shooter, Bob Layton, Mike Zeck and Marv Wolfman through these shows….