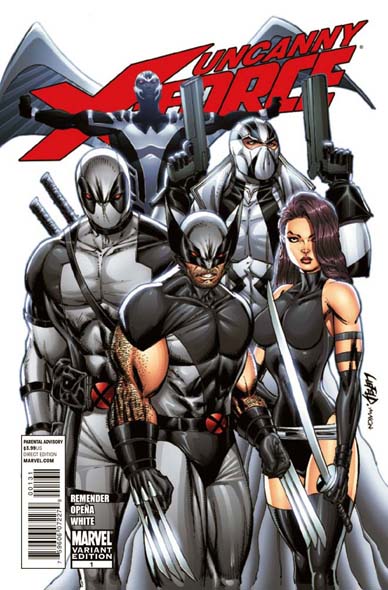 With the re-launch of X-Force #1 yesterday, I got to thinking about the origins of the X-Force franchise and how it almost failed to come together before going on to shatter sales records in 1991.

Back in late 1990 I was rewarded the responsibility of writing the New Mutants.  I had drawn the bo for the previous year with Louise Simonson and Fabian Nicieza won the scripting assignment and would give voices and snappy dialogue over my stories. His contributions to the success of X-Force cannot be underscored enough. My first issue was New Mutants #98 and in that issue I introduced three key new characters into the Marvel Mutant Pantheon, Deadpool, Domino and Gideon. Sales on #98 were already triple the sales of where we had started out a year prior and New Mutants sold out day and date. Sales on New Mutants #99 and #100 tripled from issue #98. In fact, New Mutants #100 went on to sell 1 million copies, 4 printings, with no gimmicks whatsoever. The book was story driven and our cliffhanger sent a new jolt of excitement throughout fandom. Everyone from Geoff Johns to Robert Kirkman have told me stories of their memories of the last page of New Mutants #100 where we revealed the connection to Cable and his nemesis Stryfe.

Months prior to our crafting the last issues of New Mutants #100, I had requested a new launch out of New Mutants that featured a fresh start for the new cast of characters we had assembled. Cable, Domino, Feral, Shatterstar, Warpath….these were new identities and characters to the New Mutants pantheon and as such, I argued they deserved their own title. The Marvel sales manager, Sven Larsen helped me work up a sales pitch for the editorial/sales board and we presented it for approval….and were promptly turned down. There would be no new X-title for Cable and Co. The proposed titles for the new book were X-Terminators, X-Cutioners and X-Force. New Mutants would continue intact.

Sven kept pushing for a new launch, arguing that the new launch would reach readers that were not reading New Mutants. Arguably, we were racing up the charts and gaining new readers, but a new launch could help expand the book’s audience and increase sales. Comic books is after all a business, new launches sell big numbers. After Todd Mcfarlane’s Spider Man #1 sold over 3 million copies, Marvel had a change of heart and it was believed that a new X-franchise would move a considerable number of copies. I remember exactly where I was sitting when I got the call that X-Force was going to happen. I freaked, this was the culmination of my comic book dreams.

However, soon afterward, I was reminded by many in the comic business, peers and associates, that X-Force would not achieve sales on par with Spider-Man or the upcoming X-Men relaunch due to the fact that Cable, Domino, Shatterstar were not the high profile, recognize-able icons that Spider-Man and Wolverine were. Never one to let circumstances or conditions keep me down, we pressed forward with our best efforts and lo and behold, X-Force and it’s multiple editions sold 5 million copies AND went back to press for a special Gold edition. A new franchise was born and many talented folks eventually followed in our footsteps. Greg Capullo, Tony Daniel, Jeph Loeb, Adam Pollina, Jimmy Cheung, Whilce Portacio and Warren Ellis each contributed significant pieces of the X-Force puzzle. In recent re-launches, Chris Yost and Craig Kyle along with Clayton Crain and Mike Choi added a new look to the longstanding X-franchise. The brand new launch that features my baby Deadpool on the roster hit stores yesterday by Rick Remender and Jerome Opena. The book is fantastic. Now if only Cable can somehow return to the roster…..

In short, X-Force has always been the little franchise that could overcome all doubts and obstacles and is famous for giving the X-office a new corner of charcters, creativity and excitement that has lasted for 20 years!

After a decade away, comic’s most popular Avenging Angel returns this summer in an all new monthly series from Image Comics! Written by Mark Poulton (Koni Waves) from a story by Avengelyne creator Rob Liefeld and illustrated by brilliant newcomer Owen Gieni Avengelyne’s return is a dramatic new chapter in the sag of the Fallen…

So this past weekend North America boasted two major comic-conventions, the much hyped debut of C2E2 in Chicago and the much-less hyped but no less controversial inaugural Anaheim Comic-Con. The C2E2 show had the backing of Reed Exhibitors and what appeared to be the entire comics industry with  every major comics publisher in attendance as…

Way, way back in 1988, when Madonna and Michael Jackson ruled the music charts, I was just getting started over at Marvel comics. Fresh off my Hawk and Dove mini-series, with no new prospects in sight, X-men editor Bob Harras gave me a call and asked if I’d like to draw the New Mutants. He…