So many great comic books this year, 2012 felt like the beginning of a new standard for the art form. Image Comics celebrated its 20th Anniversary with several striking new books from a diverse talent pool. New books from established industry giants such as Grant Morrison and Ed Brubaker were joined by fresh new voices in Brandon Graham and Joe Keatinge. Together they combined to give us Happy, Fatale, Prophet, Multiple Warheads, Hell Yeah and Glory. Tim Seeley wroteWitchblade and Bloodstrike but his new horror series Revival caused a frenzy. No new book was bigger than Saga from Brian K. Vaughn and Fiona Staples. And The Walking Dead continued its ascension to the top of every possible measure of critical and commercial success.

Meanwhile, over at DC Comics, there was one voice that rose above all others,  Scott Snyder, whose Midas Touch continued to charm everything in his path. During his brief tenure on Batman he has had only two storylines to date, but both have been co-opted by the publisher as major cross-continuity events, touching dozens of other titles. This is the definition of a game-changer, when the rising tide lifts all ships. Without Snyder at the helm, DC would look vey different. Batman is the gold standard of the direct market.

My list is limited to the Top 5 so let’s get to it before a new year is upon us. My honorable mentions would include GLORY, X-FORCE and MUDMAN. 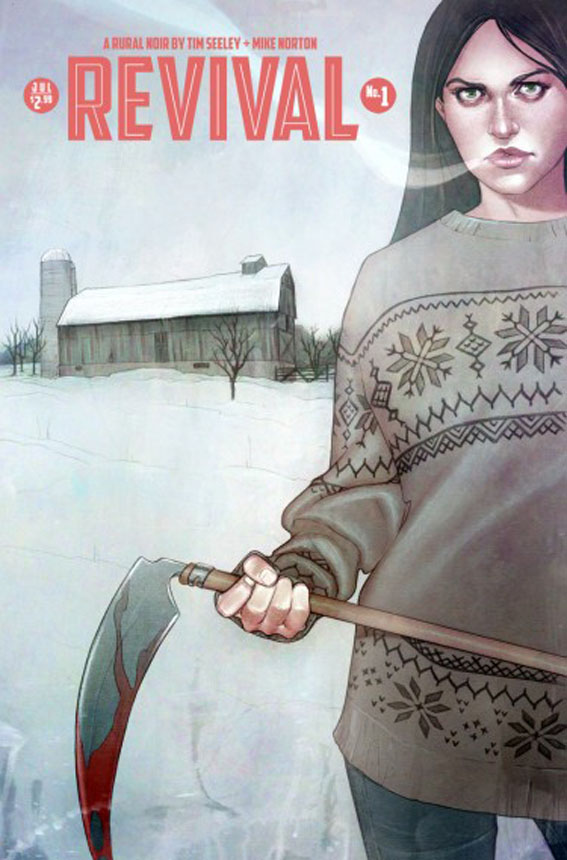 5. REVIVAL – Tim Seeley and Mike Norton’s modern gothic epic concerns the mysterious “revival” of the presumed dead residents of small town USA. The comparisons to Walking Dead are warranted in so much that they both excel at creating a tense atmosphere where the unexpected looms around the corner of every page. The art is clean and the story telling is fantastic. I don’t want to ruin the mystery or the suspense in any way, just give the series a chance if you have not already, trust me it will compel you to read further issues. I imagined the first issue as an HBO television series, hopefully that reality is not far off. 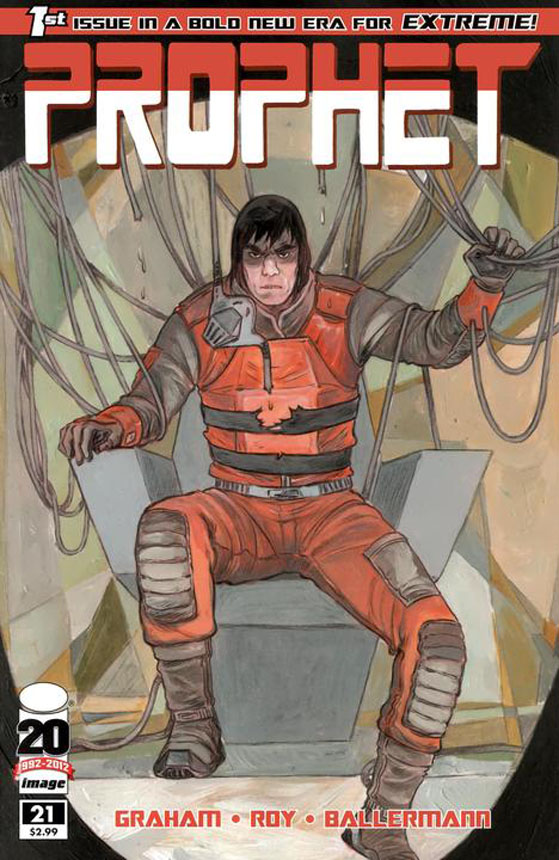 4. PROPHET – Having created Prophet twenty years ago, I can tell you that I was not prepared for this drastically different and wonderful approach to the character. Brandon Graham’s take on the concept of a misplaced time traveler has provided all of us with the most creepily bizarre and stupendous journey of the year. This version of John Prophet that takes place in a far, far-flung future has experienced a varied menu of un-familiar alien mating rituals, living, organic weaponry, questionable immortality and supernatural communion. Graham has an embarrassment of riches illustrating his stories, Simon Roy, Farel Dalrymple, Giannis Milonogiannis provide stunning visuals depicting lush, sometimes harsh, always dangerous alien environments. A gifted illustrator himself, Graham illustrated an entire issue of Prophet as well, widening the already diverse artistic palette. This book is the gift that keeps on giving. If you are a fan of Twilight Zone, Outer Limits, Soylent Green, Planet of the Apes, Omega Man, Bradbury, Serling, Lynch or Kurosawa give Prophet and its mind-bending science fiction your immediate attention. 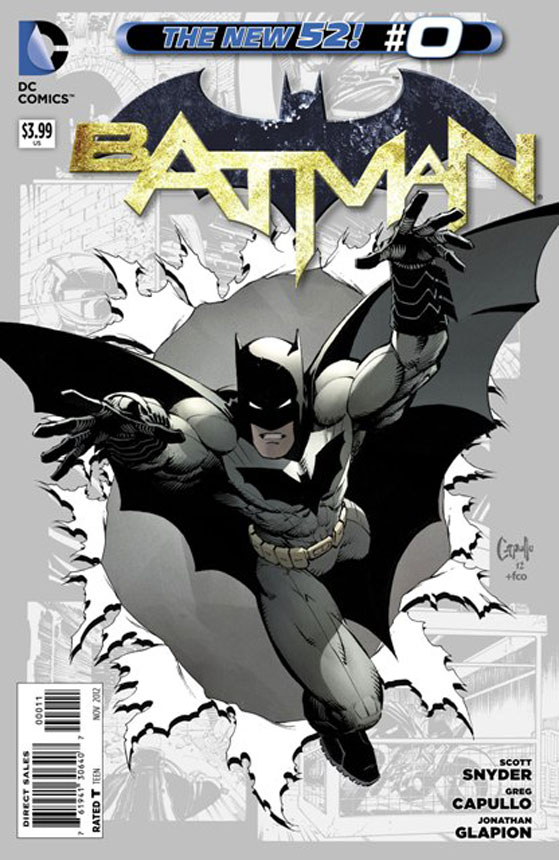 3.  BATMAN. Success, thy name is SNYDER! Scott Snyder shot out of a cannon in 2011 with his dizzying debut on Batman, making it the flagship of the DC 52. He continued to shake the foundations of Gotham throughout 2012 with the most exciting Batman tale in ages with his “Court of Owls” saga. It’s not easy to add an integral piece of mythos to the existing Batman canon, but Court of Owls was immediately received as an important milestone in the legend of the Dark Knight. The mystery and hidden history that Snyder has given the Wayne family has strengthened a global icon that needed a fresh coat of creative paint. His “Death of the Family” Joker epic has been co-opted by the entire Bat-family strengthening an entire line of comic books and finds readers and retailers alike eagerly anticipating every new issue. Joined by industry veteran Greg Capullo, as well as Becky Cloonan, Raphael Albuquerque and Andy Clarke on various issues and back-up stories, the book boasts powerful visuals that enhance the depths of Snyder’s vision. His new Superman title is still a few months off but I’m certain it will rank among the best of 2013. 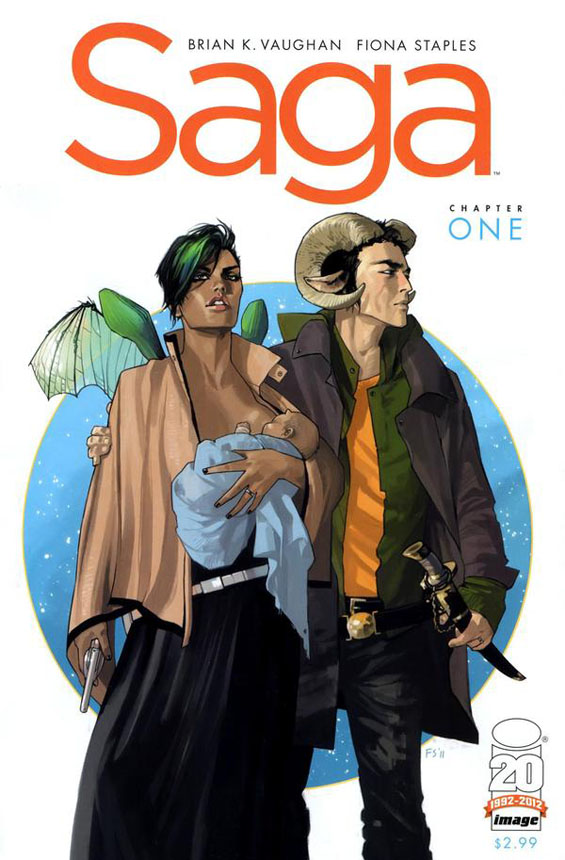 .2 SAGA – An outrageous first issue that introduces us to a pair of alien fugitives on the run from the Empire never slowed down and let us catch our breath even once. The opening scene of childbirth and it’s blunt, frank and hilarious exchange created an unexpected Tarantino meets Star Wars vibe that has provided the most unique and exciting comic in ages. A bounty hunter with a colorful and conflicting agenda has stolen the show but the universe that Brian K. Vaughn and Fiona Staples hascreated is flush with unknown surprises lurking in every wormhole.  The first issue went through multiple printings as word of mouth spread on this rare masterpiece in the making. Grab the trade collection and catch up while you can! 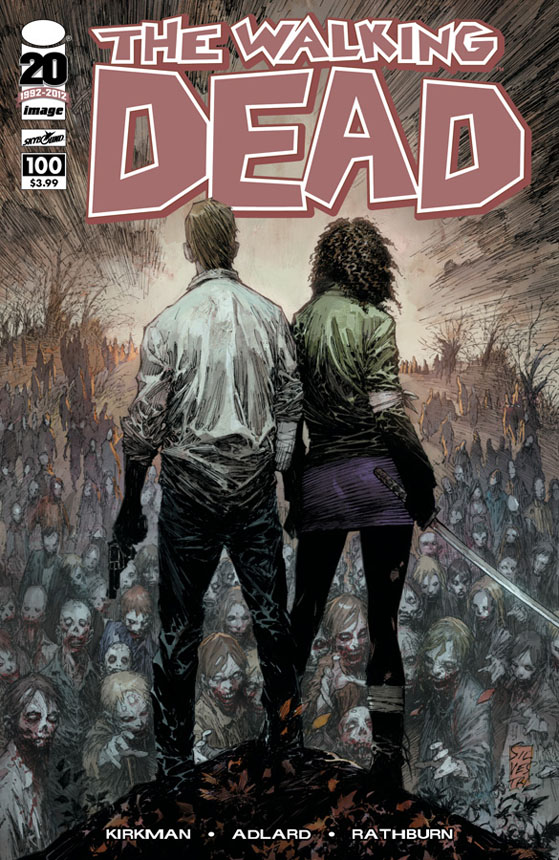 .1 THE WALKING DEAD – Through the winter and spring of 2012, I had SAGA as the runaway number one comic book of the year. Then summer came and with it the arrival of the 100th issue of Robert Kirkman’s ground breaking powerhouse. The milestone and the storyline that accompanied its arrival has seemed to energize Kirkman who is producing the best work of his career these past 6 months. The heroes in any tale are only as good as the villains or the obstacles they face and there is currently no nastier villain in any genre then the man wreaking havoc with the survivors in Walking Dead. Negan is as terrifying a figure as I’ve encountered in years. He and Lucille, his “vampire bat” walk with such tremendous swagger that you are compelled by his every subtle nuance. A discussion with young Carl that finds Negan tossing hurtful insults and cruel taunts at the fragile young boy was as terrifying as any torture or beating that he has committed thus far, and he’s done plenty of both. I haven’t put down a comic to catch my breath in quite some time. This Negan is an absolute bastard and watching as Rick negotiates around his tyranny is the best duel in comics.Kirkman has spent years building our trust and investing us in the survival of this particular cast of characters,Negan’s arrival has created a sense of danger and terror that had been missing, at least for me, over the last year or so. From the myth of Negan and the promise of his arrival, to his memorable, terrifying debut in issue #100, he has maintained a powerful presence in the pages of The Walking Dead. The promise of tyranny that Kirkman began with The Governor many years ago, has been honed and mastered in the form of Negan and his reign of terror. This is the Walking Dead’s Darth Vader, their Doctor Doom or Magneto, he is the nemesis that will define them for years to come. Kudos to the often unsung and overlooked storytelling of Charlie Adlard, over nearly 100 consecutive issues he has defined the look of this book and his powerful illustrations provide the punch that has put this book over the top.

What a great year for comic books. Here’s to a fantastic 2013! Cheers!

Deadpool explodes in action with even more images from the upcoming Deadpool video game! How can this game NOT live up to the hype with all these dynamic new images being released? Enjoy!

So I attended the Amazing Comic Con this past weekend and it was a blast! So many great fans, the place was packed! Robert Kirkman, Todd McFarlane, Jeph Loeb were also guests, it was like a great party of friends celebrating comic books! I signed a gajillion comics, Youngblood, Captain America, Brigade, Image United, Onslaught…

Continuing to preview the upcoming series The Infinite from Robert Kirkman ( Walking Dead, Invincible) and rob Liefeld ( Deadpool, X-Force) These are pages from The Infinite #2 and #3. The action explodes in issues 2-3 providing great thrills and chills for all involved, including you, the reader!