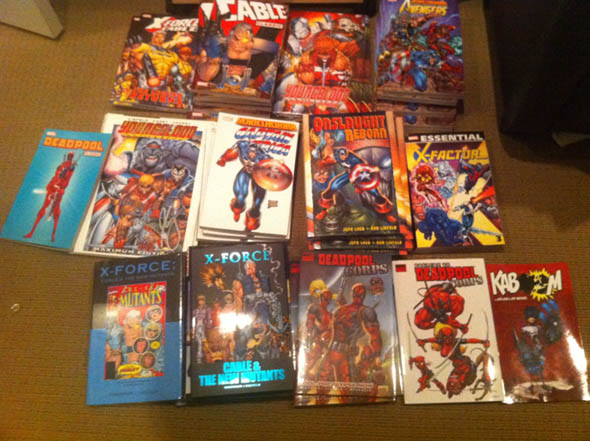 Goodbye 2010, Hello 2011! I could not be more excited for this new year and I look back on 2010 with great favor. I had a great year and an unbelievable decade. I set goals, achieved them and now it’s time for all new goals and markers to set.

The past 10 years was about re-visiting past successes, tackling obstacles that many said could not be tackled. The above picture is about as crystal clear as I can present it. It sums up the past decade for me. I was in self-imposed, baby-making retirement a decade ago. Exhausted from a fast and hard decade, I needed a rest. The initial draw of coming out of retirement was first to work with exciting creators such as Mark Millar, who was blowing me out of my chair with his work on The Authority, and Robert Kirkman who exploded on the scene out of nowhere to ignite the faltering indy marketplace. But another, even more potent attraction to getting back in the business was the proliferation of handsome hard cover collections that the publishers were producing. Much of my work had not been collected. My initial New Mutants run had been collected in a paperback in 1992, it sold out and had 4 printings but somehow was not a candidate for a hard cover. Ditto for my chart topping X-Force work. And my chart topping Captain America run, etc. I became obsessed with getting new and old work collected, building a library of my work that in 2003, did not exist.

One by one, I tackled projects that people told me were beyond my reach? X-Force? It had been retired and re-imagined as a goofy satire book with a floating poop creature. Cable and Deadpool had been retired and re-imagined as Soldier X and Agent X and met with universal derision. Were these the products of too many bong hits by progressive minded hippies? Seemed like it to me. So when Bill Jemas rang me and offered me the reigns to return to X-Force, I was a bit stunned. But in no time whatsoever, I was writing and drawing Cable and co. again, reunited with my scripting partner, Fabian Nicieza. A Shatterstar mini-series followed. I kept pinching myself, wow, I was drawing X-Force again! Too cool. Check one reunion off the list.

Next up I had a chance to re-visit Hawk and Dove in the pages of Teen Titans. It was a new female version of Hawk, but the Dove that I had co-created with Karl and Barabara Kesel was still intact. As was the nemesis we had created together, Kestrel. After 2 issues of Teen Titans, I got another call from Marvel, this time from Joe Quesada and editor Mike Marts, offering me a chance to do a sequel to Heroes Reborn with my former collaborator Jeph Loeb. This was the jaw dropper, but not THE jaw dropper, that comes a little bit later.

Back to the Heroes Reborn anniversary project, I was like “What??” I laughed, thought it was a joke? I mean Heroes Reborn was the project that divided the industry. And by industry, I mean the folks in management and editorial, not the fans. The fans supported Heroes Reborn, catapulting Captain America and Fantastic Four and Avengers to sales numbers they haven’t reached since. But the fact that the books had been outsourced to myself and Jim Lee was one of the most divisive business decisions that the comics industry had ever seen. Again, the numbers were there, as evidenced by the thousand people that crowded Mile High Comics for the signing for Captain America #1. I can still see Jeph Loeb’s stunned face, it was a classic coming of age experience for the young comics scribe. But a sequel? Seriously? Sure thing, but I petitioned them to combine it with the event that created Heroes Reborn, Onslaught. And with that, Onslaught Reborn was created! We were handcuffed by the fact that Civil War was coming out and our entire series needed to be set in the Heroes Reborn universe, basically making it an imaginary tale, but the ramifications of that series are finally being felt in the upcoming Onslaught Unleased series from Sean Mceever. And Loeb once again proved why he is beloved by artists everywhere, delivering amazing visual opportunities at every turn. The Avengers vs. Onlslaught! Hulk vs. Thor! Cap vs. Iron Man! The Masters of Evil! Wolverine! What a blast. And the cherry on top was the collections of all the Heroes Reborn adventures! It was a huge reunion, another never-gonna-happen materializing. Check number 3!

And then the other show dropped, Robert Kirkman asked me if I would consider bringing Youngblood back to Image???? What the high-heaven was going on here??? Image and I had had what could be considered a pretty nasty, ridiculously high profile divorce. The idea that we would ever re-unite was as remote a concept as there was. And here it was, it was about to happen. It was a no-brainer, the Image guys were always like brothers to me, we fought and played with equal vigor. It was the perfect timing, and a re-colored, re-mastered Youngblood collection ensued! This would set in motion the most unbelievable project I’d ever considered, the unprecedented Image United series. We were not just sharing a publishing label, we were sharing panels and pages now, in a production that has proved daunting, but worthwhile. The Image reunion has proved to be the most satisfying of all and the one that holds the most potential for the future.

And last but not least is my little crazy baby named Deadpool. This last few years, with covers, fill-ins and finally the zany Deadpool Corps. maxi-series, I was able to spend some quality time with a creation of mine that has been a white hot hit since the day he first appeared in my first issue as writer-artist on New Mutants #98. It has been a blast!

So Cable, X-Force, Youngblood, Hawk and Dove, Heroes Reborn, Captain America, Image United, Deadpool, so many familiar faces, so many reunions. Bridges previously considered burned with extreme prejudice were re-built in style. Fun times, new memories. And best of all, lots and lots of hard cover collections, with many more on the way. Mission Accomplished.

But what’s next? If the past decade was about looking back, the new decade is about looking ahead. New creations, new collaborations. My 2011 is packed with new characters and new concepts that are almost ready to meet the public, and there are a few old haunts that need closure, but they’ll be side by side with new worlds and universes that should fuel another 25 years of creative synergy.

And I could not be more excited about all of it!!!

With the re-launch of X-Force #1 yesterday, I got to thinking about the origins of the X-Force franchise and how it almost failed to come together before going on to shatter sales records in 1991. Back in late 1990 I was rewarded the responsibility of writing the New Mutants.  I had drawn the bo for…

So back in the summer of 2006 I had a Kamandi pitch that I had shared with several folks in the industry. I should make it crystal clear, make no bones about it, Jack Kirby’s Kamandi is one of my all time favorite comic book series ever.  I had shared my pitch with Jeph Loeb…