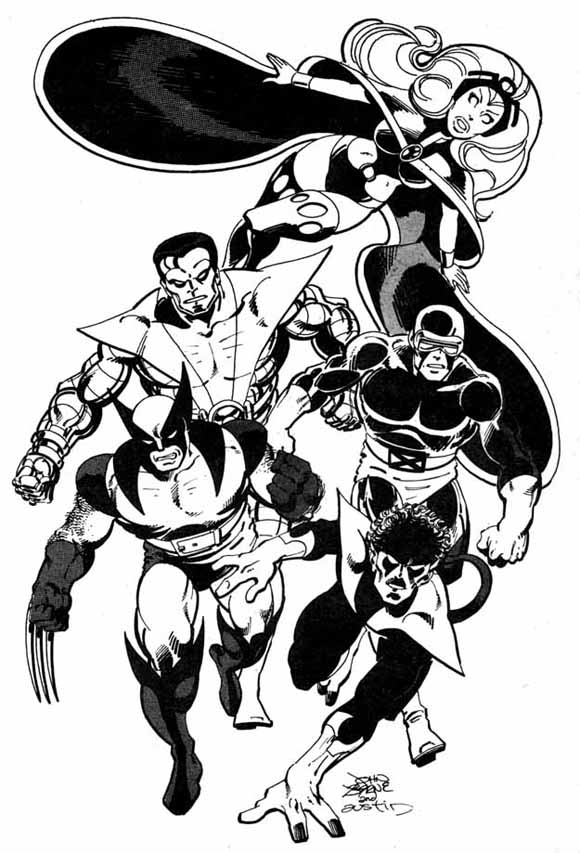 The Uncanny X-Men continued to surge forward, building momentum with every new issue by the creative team of Chris Claremont and John Byrne. The intrigue and danger was further enhanced as an old nemesis, Mesmero, was elevated to a formidable threat in an issue that found Beast returning from the pages of the  Avengers to track his former teammates who had gone missing. Beast finds the team as featured players in a travelling carnival of freaks and sideshow acts. Wolverine’s feral nature was further enhanced as a chained Wildman who could barely muster a coherent word. Storm’s sexuality came to the fore as Byrne depicted her as an exotic Jungle Queen in a barely there leopard bikini top and bottoms. My memory of Byrne’s run is of the spotlight frequently shared by two characters, Wolverine and Storm, each of whom played to his particular strengths.  In truth, every X-Men looked fantastic under Byrne’s pencil, but his Wolverine was long considered the gold standard and is believed to have created added interest in the series. His diminutive stature and the emphasis on those hairy, hairy arms distinguished him from all other depictions to date. Logan/Wolverine carried a constant growl or smirk on his face that other artists of the time did not catch. His depictions of Wolverine in action were iconic and instantly imitated.  Under John, Storm was much more voluptuous, more elegant than she had been portrayed before.  Her oval face, big opal eyes and her curvy figure found extra attention with John at the artistic helm. Wolverine was primal rage and Storm was a sexual creature in a way she hadn’t been portrayed with Cockrum. 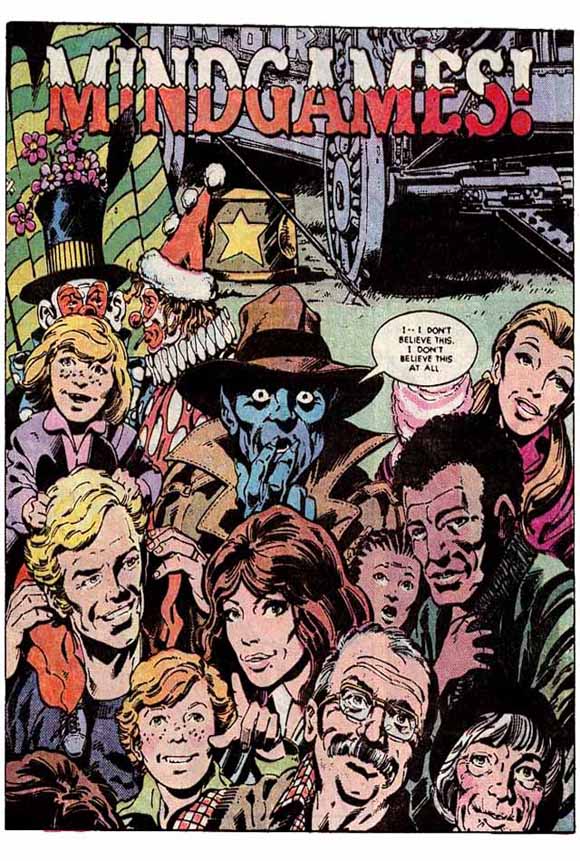 The issue ended with the big, dramatic reveal that Magneto, the long time foe of the X-Men had been behind Mesmero’s plan all along. The final splash where Magneto emerges from the shadows is as good and often imitated as any  “villain reveal” before or since. The next two issues would depict Magneto in as cruel and evil manner than he had been portrayed before. After completely dismantling the X-Men with greater power than previously depicted, Magneto held the entire team hostage deep within the base of a volcano. They were each trapped in mechanical chairs restricting their every movement as they were attended by a frighteningly cold and aloof robot servant named “Nanny”. The Nanny robot bore a more than passing resemblance to Byrne’s own ROG2000 robot that he introduced at Charlton Comics. More to the point, the robot displayed another strength of Byrne, which was his ability to depict technology in a sleek manner, superior to anyone in his time. Byrne-tech, Byrne-walls, floors, was an influence on me, my friends and up and coming artists that I began seeing on the convention floors. My first conventions were in the very early 80’s and there were several young artists all attempting a Byrne style and a Terry Austin ink line. The technology that Byrne depicted was very style-specific and his robots were fantastically imagined and executed. His impact was growing. 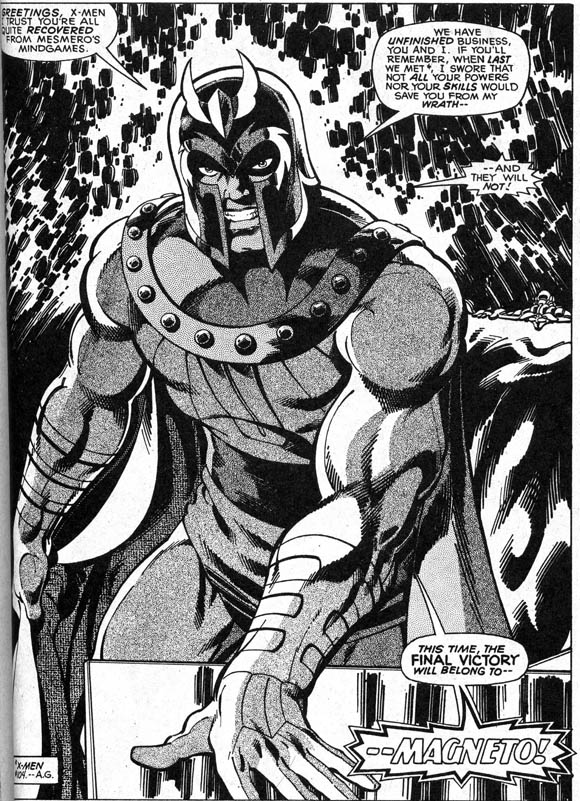 But let’s hear it for Chris Claremont as well. The romance and drama in the X-Men were a huge part of the books appeal. When I hail the Uncanny X-Men run as the greatest of all time, much of that is due to the influence it has exerted on the rest of pop culture. The romantic love triangle between Scott-Jean-Logan was the obvious precursor to the Edward-Bella-Jacob triangle in the Twilight series. Torn between two lovers, one stable and strong, the other feral and restless, a wolf even, evokes Scott-Jean-Logan for me and always will. The corruption of Phoenix and her struggle with the dark side culminated long before the Skywalker family drama by at least three calendar years. The Hellfire Club is one of my favorite concepts that Chris ever conceived, wicked, Victorian styled mutants operating a secret cabal among the rich and elite of Manhattan served as the basis of his finest tale. Wolverine was multi-layered, the outsider who longed to be accepted while resenting all who scorned him was the recipe for the most popular mutant of his time.  Strong women were Claremont’s staple, Jean Grey, Moria Mctaggart, and especially Storm were more than just glamorous mannequins, they were pillars of the team. Consider Storm’s role on the team, an African women in a starring role, commanding as much attention and story as any man in the book. You didn’t find many comics with strong women, much less women of color circa 1978. Storm’s triumph over her claustrophobia while attempting to escape from imprisonment in Magneto’s lair gave her a strong connection to the readership. Her vulnerability and subsequent victory over her own fears created a deeper bond with the characters and the fans. Yet another signature achievement by Claremont. 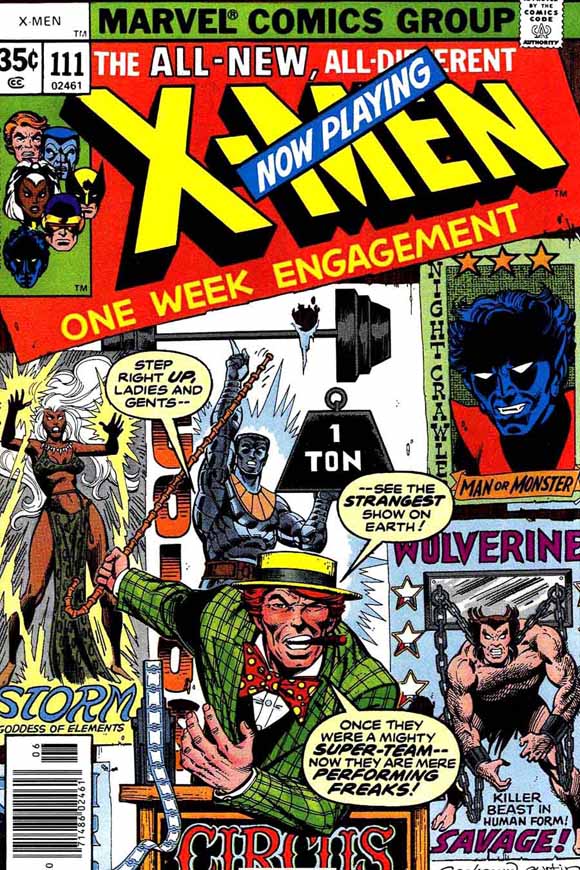 An amazing facet of the impact of Claremont-Byrne’s run, as with anything from that period, was the SEVENTEEN PAGES that it all unfolded on. Remember, they had only SEVENTEEN PAGES to establish themselves each and every month as the masters of their craft. When I broke in the business, every comic at the majors was 22 pages, which was the standard from the mid-eighties forward. In recent years, the majors have cut down production to 20 pages an issue. Imagine whatever impressive work you’ve enjoyed over the years and immediately SUBTRACT between FIVE to THREE pages from it. Would it hold up? Add to this that Byrne routinely, almost regularly utilized at least one complete splash page as well as a double page spread in every single issue and this accomplishment becomes even more staggering! This run is truly brilliant on every single level. Byrne exceled at double page spreads, they were lavish and carried true impact. Wolverine throwing a flying swing at Sauron or Ka-Zar and the X-Men carefully perched above Garrok’s Lair nestled within the canyons are images burned into my retina for all time. On a personality note, Byrne was famously rumored to have quite an ego during this period , actually it’s not a rumor, just read The Art of John Byrne and  you’ll have concrete proof, but to that I say, “Have at it, Johnny! You more than deserved the ego and cockiness that came with producing such lush and amazing work!’” During this period and for the next decade, John Byrne was the absolute best in the business, but make no doubt, the legend was born in the pages of Uncanny X-Men. 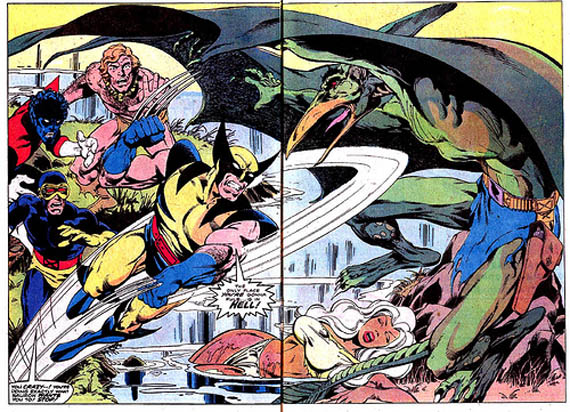 During John Byrne’s run he illustrated several other Marvel comics, he was their most prolific producer. He contributed to Captain America, Avengers, Marvel Team-Up, Marvel Two-In-One and Fantastic Four. His work was inked by the very best of that period, Joe Sinnot, Dan Green, Joe Rubenstein and Dave Hunt. His signature work and style always stood out no matter who inked him. I loved Dan Green and Joe Rubenstein over him but Terry Austin remains my absolute favorite inker over John. Terry elevated everyone’s art, he had an inking style and approach that no one has ever mastered. I’ve always joked that his inks are from the future. No one else’s line work comes close to his razor sharp precision and line variation. His cross hatching and textures would inspire two decades worth of imitators. He was as visionary as any artist and he was the most sought out inker of his age. In the early 80’s I spoke to George Perez, no slouch in the popularity department in this era, and he told me that he always asked for Terry Austin first, but Terry was often too busy to tackle an entire issue. Stories of Terry’s approach to his craft are the stuff of legends, from shaving down his inking nibs and creating custom tools, it really communicates the level of experimentation and risk he took to creating the most unique inking style in the business. I didn’t actually view Byrne’s pencils until the end of his X-Men run and they were  definitely softer, fuller and more textured than I expected, but the mechanical precision approach Terry applied to them created an unexpected sheen that shouldn’t have worked as well as it did, but was magnificent. I’ve read thirty years of interviews with both gentlemen and they both acknowledge that the approach wasn’t always what the other anticipated or preferred but that it worked regardless. For me, I don’t care, my 10 year old self loved the end product. It didn’t matter wether the penciler liked the inks, as long as the final product looked as superb as these did.

The best argument for Terry Austin’s contributions to this particular X-Men pantheon is Uncanny X-Men #118. This is the issue that Wolverine and the team arrive in Japan and Wolverine is introduced to his eventual love, Mariko. Sunfire palys a signature role and Moses Magnum and the Mandroids show up. It’s a great issue packed with loads of story and character development, the art is great, but….Terry Austin is no where to be found. A talented inker named Ricardo Villamonte assumes inking chores for this episode and while the work is strong, it is a far, far cry from the technical mastery and prowess of Austin’s ink line. Ricardo brought his “A “ game to each and every page, he was more than competent to do the job, but the line work was lighter and thinner and the faces especially were not as defined or enhanced. The depth of field, one of Austin’s strengths was not as pronounced without Terry. Austin returned for the next issue and the direct contrast on the faces of Moses Magnum between Ricardo’s inks and Terry’s further underscores Austin’s role in creating the all around look and commercial appeal of this run for the ages. 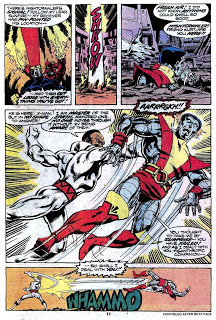 Byrne was actually credited as co-plotter, sharing story duties with Claremont with issue #114. There are numerous stories of the creative friction between these two authors, the kind of push and pull that rests on the razor’s edge, always threatening to destroy the union but guaranteed to improve the overall body of work. The book changed with Byrne, it was deeper, more layered, the obvious elevation of Wolverine and his increased role and the actual layout of the book were a result of his input and influence. As mentioned before, every issue featured a splash, followed by a double splash and each issue often ended on a powerful splash image as well, this was not the case under Cockrum who was a more passive collaborator than Byrne.

The most signature Byrne influence was yet to come, a two part showdown in Canada with John’s Alpha Flight. John was Canadian and Alpha Flight was from Canada and Wolverine was Canadian, this was about to get even better.

Way, way back in 1988, when Madonna and Michael Jackson ruled the music charts, I was just getting started over at Marvel comics. Fresh off my Hawk and Dove mini-series, with no new prospects in sight, X-men editor Bob Harras gave me a call and asked if I’d like to draw the New Mutants. He…

How To Beat The Haters ( how I do it! ) It was early 2000 when I received a call from Bob Harras asking me to pinch hit a few issues on Wolverine. Steve Skroce was cutting his run short because he was being called back in to duty for The Matrix sequels. There were…