A few weeks back, Marvel Executive Editor Tom Brevoort (Siege, New Avengers) shared a proposal from years back, honestly I had not seen it in over 22 years http://marvel.com/blogs/Tom_Brevoort/entry/1753. It was a pitch that Jim Valentino and I produced back in the late 80’s for a YOUNG AVENGERS title. Marvel editorial had suggested that they were looking for a Young Avengers title and Jim and I jumped at the chance to land what f0r us was a dream gig. At the time I had just completed two issues for Marvel’s Atlantis Attacks storyline, one of which featured NAMORITA, the cousin of Namor, Sub-Mariner. I love drawing youthful characters and minor characters with untapped potential and wanted to continue drawing Namorita in some fashion. I also have always loved underwater characters such as Aquaman, so our pitch heavily featured Namorita and the Atlantean supporting casts. The rest of the proposed cast, Speedball, Vance Astro, Nova, Speedball and Firestar were favorites of both Jim and myself, we really thought we could have produced a popular new series with a cast that marvelous! We filled the pitch with tons of new characters, Cougar, Brahma, Rebound, Gridlock, Spectra, Lynx, Combat and Photon, many of whom would eventually find their way to Youngblood, Shadowhawk and many other titles from Image comics. Valentino and I shared a studio at the time, one of my favorite periods of my comics career, and we the week that we took to create the Young Avengers proposal was filled with powerful energy and enthusiasm that I can recall even to this day. It was a blast.

I was offered New Mutants as a permanent gig while we waited for word from Marvel about the status of our proposal. I had been offered the Hulk during that period as well, but ultimately turned that gig down in hopes of landing either Young Avengers or keeping the New Mutants assignment which still had a few months before I would need to begin work on it. Both Jim and myself were gainfully employed by Marvel at this point, we were working regularly, but were determined to at least try and create this unique opportunity for ourselves.

Then one day the phone rang and on the other line was Mark Gruenwald, the man who had hired me on the spot a few years earlier at Wonder Con. Mark was one one of the brightest, wisest people in the comics industry. He was also refreshingly bold. He reminded me that I had been offered a plum assignment on New Mutants and that I should in his words ” take the bird in hand rather than the one in the bush.” Powerful words even to this day. I stressed to him my passion for Young Avengers and he said that even if Marvel were to proceed with a Young Avengers title, it would be a ways down the road, at least a year’s time. He reiterated his statement about “the bird in the hand” and stressed that I focus on that upcoming assignment. Message received loud and clear. I understood Mark’s point and confirmed that I would accept New Mutants and committed to a long and healthy and somewhat unexpected run on that title. Jim and I combined our efforts on an issue of  What If that featured Wolverine as an Agent of Shield. It remains a fan fave to this day, I see that issue of What If as often as Youngblood, New Mutants and Captain America’s when I sign at shows. Valentino and I had a great chemistry, he was very much the teacher and I was the eager student.

Turns out that by splitting the baby as it were, Marvel received not one but two successful books as Valentino was handed the reigns of Guardians of the Galaxy which resulted in the longest and best selling run that title had ever seen. So by not accepting our Young Avengers, Marvel received Guardians, New Mutants and X-Force in return. Not a bad swap but I can’t help but wonder What If?

Below are the only two illustrations I retain from that proposal, Vance Astro and Brahma. Good times. 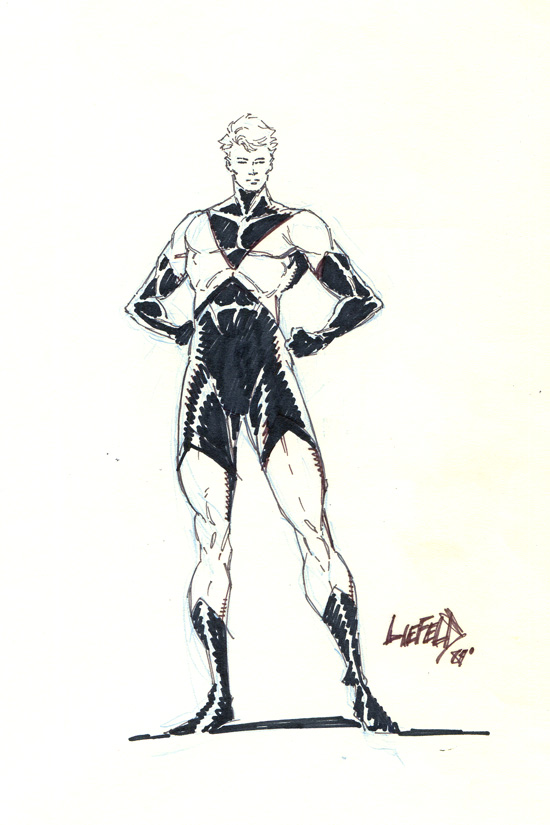 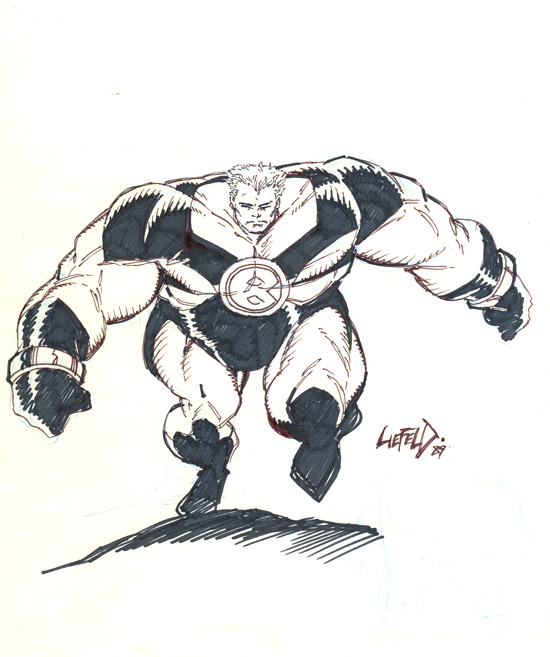 So I did an interview with iFanboy that aired this week http://t.co/pFEk72v and at the end of the interview I mentioned that there is a “Liefeld wing” of Marvel comics. Well since that interview I’ve been deluged with mail from folks who want to see what the wing looks like. Well, I can at the…

Earlier today shared some penciled pages from an unpublished New Mutants/X-Factor inventory story I had done with Howard Mackie back in 1988-89. Here are some of the inked pages from that issue. Much of the focus was on Warlock, whom I loved and had an absolute blast playing with. I invoked all sorts of influences,…

Heroes Con was as great as advertised! Huge crowds, great fans, and much love for comics everywhere. The southern hospitality was on full display. The following are some pics and illustrations from the convention. Thanks to everyone ay Charlotte for all the enthusiasm and kind words!